LRClassic hosted its fifth Series Rally to Chrissiesmeer
from Friday 19 March 2020 to Monday 22 March 2021.
Chrissiesmeer is a quaint tourist town situated in a wetland area of Mpumalanga province in South Africa on the northern banks of the eponymous Lake Chrissie. There are more than 270 lakes in the immediate area of Chrissiesmeer. Every year nearly 20 000 flamingos come into the area to breed. Lots of things to do in and around Chrissiemeer!

The heavy rain in the area caused the water levels in the lakes to rise quickly, resulting in the algae and nutrients the flamingos feast on to be deeper than normal. The flamingos left the area due to the sudden rise in water levels and resulting loss of feeding. André enquired with residents in Chrissiesmeer to find out if some flamingos were still in the area. Apparently, some were…

André left early on Thursday morning (18 March) for Chrissiesmeer to find the flamingos. Sadly, all the birds with their characteristic pink plumage packed their suitcases and left – not a single flamingo could be found. Disappointing, but not a problem, as the area has lots to see! We had a long weekend of serious driving and lots of fun ahead.

As with previous Rallies, we started a WhatsApp group for all the participants, facilitators for the weekend activities, event owners Chrissiesmeer Info, and social media. We did not make use of a rendezvous point for Friday lunch this time. André posted a pin location on the group for “Miss Chrissies”, our campsite for the weekend, so everybody could arrive in their own time on Friday.

The campsite was situated in an oak tree forest next to the main lake of Chrissiesmeer. Just after 8am, Peter Borradaile from Chrissiesmeer Info, posted a pin location where he thought some flamingos could be found, however, yet again, no flamingos. This post of the possible flamingo sighting proved to be a confusion for Rally participants later on… 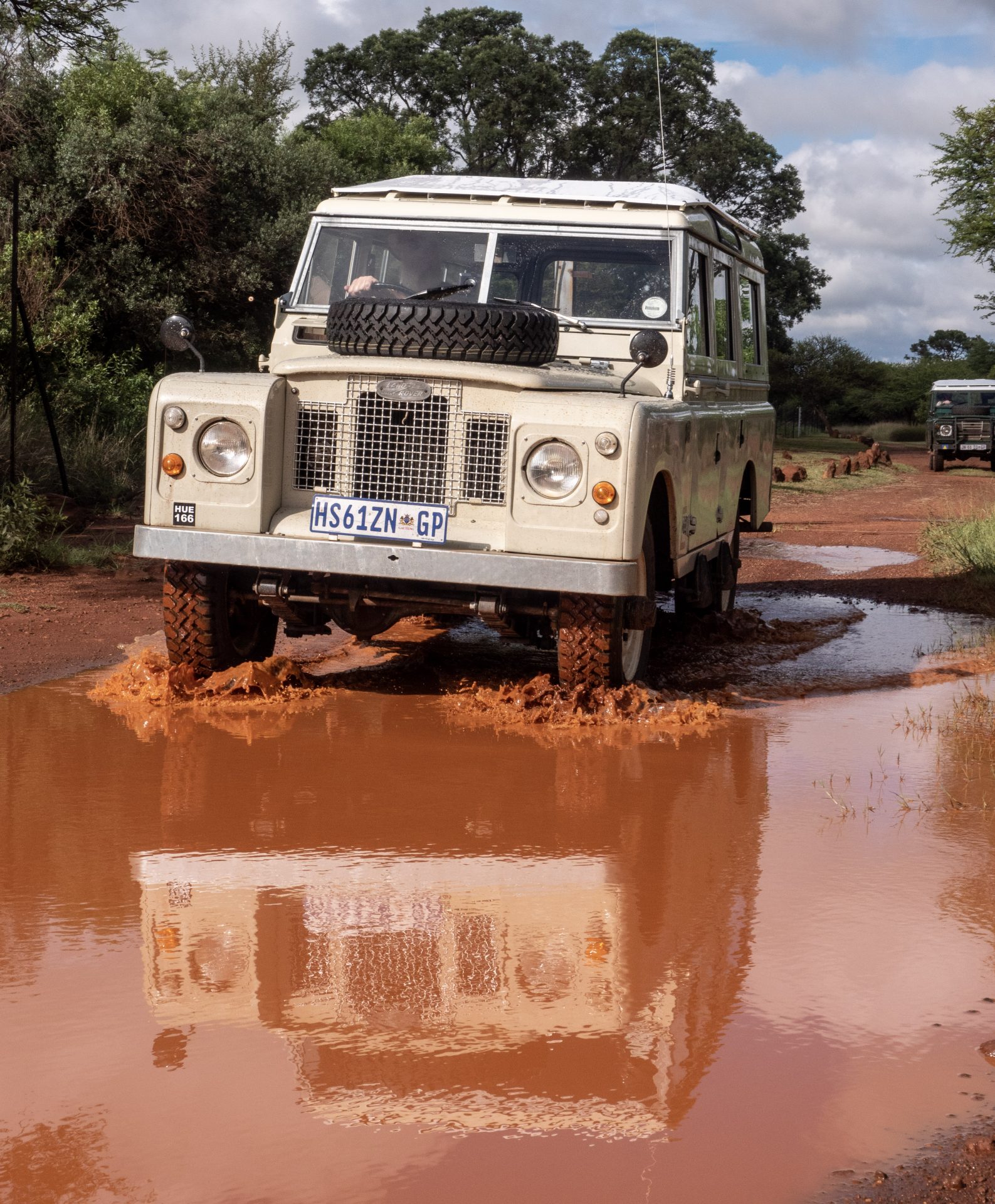 Istene, Trent and their adorable Jack Russel, Ayla, arrived early on Friday afternoon. They pitched camp and joined André at the campfire. The sun was setting over Lake Chrissie – breathtaking views from the camp. Some time later, just before 7pm, Sydney and Stanley sent a message that they were in town – some 10 minutes’ drive to Miss Chrissies. Some time passed, but no vehicle approached the camp site. André tried callling Sydney and Stanley, but they echoed the flamingos – no sign of them. After about an hour André eventually got hold of Sydney. He said they got to town, and then Stanley followed the pin location. Confusion! André and Trent sent pin locations again. After another hour or so passed, and some vehicle lights appeared in the darkness. We could hear the two Defenders approaching from a distance. After greetings, laughter and lots of joking, Stanley admitted that he mistakenly followed the wrong pin location – the one dropped earlier in the morning by Peter for the possible flamingo sighting – not the one for the Miss Chrissies campsite. Eish! Stanley and Sydney pitched their tents and joined the rest of the group around the campfire for a braai and much needed liquid refreshments. We were talking Landy till early hours in the morning!

Saturday morning was an early rise – watching the sunrise through the thick Oaktree forest, campfire going, fire for the donkey geyser started, plunger coffee and André’s famous homemade rusks. Then the phone rang – Oom Koos, Oom Koos and Eduan wanted to join the group for our Saturday activities. They soon arrived from Carolina in a stunning Forward Control and a beautiful green Series 3 109-pickup. After André briefed everybody on the days’ activities and convoy-driving protocol, the now growing convoy left the Miss Chrissies campsite in the direction of Lothair. We stopped for a “Kodak moment” at a popular spot – picturesque views of dead trees, the ruins of an old sandstone house in the distance and a mirror-smooth lake in the background.

Our first point of call was the Randell’s Ranch Museum, the second largest private collection of antique tractors in the world. We were overwhelmed, awed, stunned, flabbergasted, blown over, speechless . . . and the collection of classic cars, motorcycles and windpipe organs, pianola (a punch-poll paper self-playing piano) and much more! Then, the ultimate . . . brilliantly restored Series 1, Series 2A, Series 3 and a classic OneTen Defender! Our hearts were pumping green blood; what an amazing experience. All the vehicles were in concourse condition, very well kept – Oom Jan Randell is an absolute master and antiques fanatic.

We thought this was the highlight of the weekend, but we had more surprises awaiting . . .

The convoy headed in the direction of the Mpuluzi village to find Goliath Footprint – a rock formation with a large “footprint” clearly visible. Just as we were about to turn onto the R33, a white Defender 90 approached the convoy. It was Jerry from Piet Retief, who followed us on a WhatsApp group and decided to join us for the rest of the day – welcome Jerry! The turnoff to Goliath Footprint is not marked and is fairly hidden in the plantations, but André knew exactly where it was as he was there on a reconnaissance trip. This is an ancient rock formation – sacred and spiritual. The local people often use it as a place of worship. It is quite a climb to the top of the boulders where the footprint can be seen. It is about 6ft long and the left footprint is clearly visible. What a special site and breathtaking views of the rolling hills! 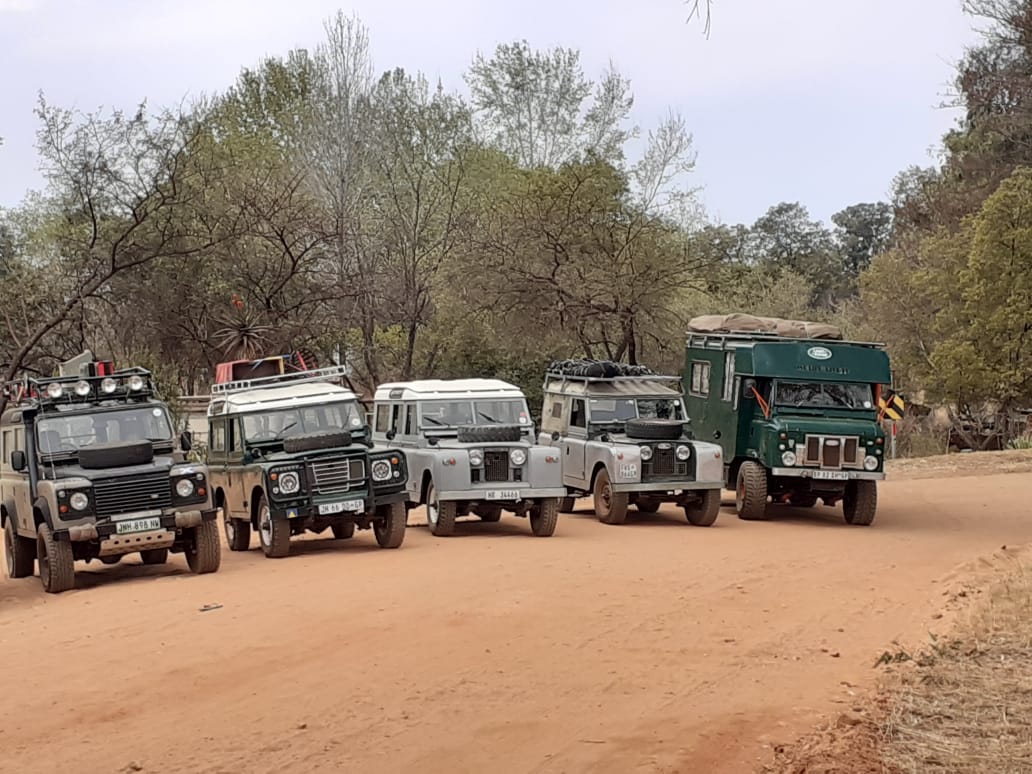 Around lunchtime André had another surprise for the group. We headed off towards Amsterdam on dirt roads crisscrossing through the forests and plantations. Deep into the plantations we stopped at a shaded point for a picnic lunch. Lots of wild mushrooms coukld be seen in the plantations – however, all poisonous, but beautiful. It was a perfect photo opportunity as the ambiance was set for an incredibly special “plantation picnic lunch”!

With tummies filled, we headed back to the quaint town of Chrissiesmeer. On our way we said our goodbyes to Jerrie, Oom Koos, Oom Koos and Eduan as they turned off towards Carolina. It was fantastic of them to join us for the day. We were thirsty and headed to John Jack, a pub in Chrissiesmeer.

The sandstone building, which houses the pub, dates back to 1898. It boasts ironwood flooring, ironwood windowsills and – you guessed it, ironwood door frames. We sat on the stoep enjoying a cold frothy – they only served quart beers. A gin pub was next door, and soon we were enjoying craft gin as well as we were waiting for Rose and Ntsoaki, Sydney’s and Stanley’s wives, to join us. They were driving Ntsoaki’s white Defender 90. It was late afternoon and we wanted to watch the sun set over Lake Chrissie. Ntsoaki and Rose met up with the convoy just as we were leaving town. We stopped at the entrance to Miss Chrissies at the point where we could get the best view of the sunset – spectacular scenes with clouds in contrast with the horizon and lake projecting mirror images, blue-purple and red sun setting. We all sat on the Landy roof racks soaking up the scene as a Fish Eagle sounded the “Call of Africa” . . . incredibly special moments!

Back to the campsite – as we lit the campfire, Minette, a friend of Istene and Trent, joined us for the remainder of the weekend. André invited Oom Ben, his wife and daughter, Hester, to join us around the campfire for some storytelling on Chrissiesmeer history and for their legendary melktert! Oom Ben and his family own F.R.O.G., a coffee shop in town, and Hester takes guests out on sightseeing adventures around Chrissiesmeer – frogs, wildflowers, flamingos, and everything else to see and do. Oom Ben shared his in-depth knowledge and utter passion for Chrissiesmeer, the Scottish influence on the establishment of the town, the fauna and flora of the area, the history of farming in the area and the current situation in town. It was clear that the Covid-19 lockdown had devastating effect on the town with lack of tourism as the main revenue stream. This is exactly why LR Classic chose the town of Chrissiesmeer to host the Rally – to add value to the town, its people, and businesses, and by exposure to promote Chrissiesmeer tourism.

Sunday morning lazy rise from the tents . . . last nights’ campfire stories and Landy chatter have taken its toll. André made his standard plunger coffee – strong coffee. He joked that if you did not brush your teeth, not to worry as the caffeine will dissolve the plaque! Trent lit the campfire. The campfire and smoke provided relaxing ambience in the crisp morning air. 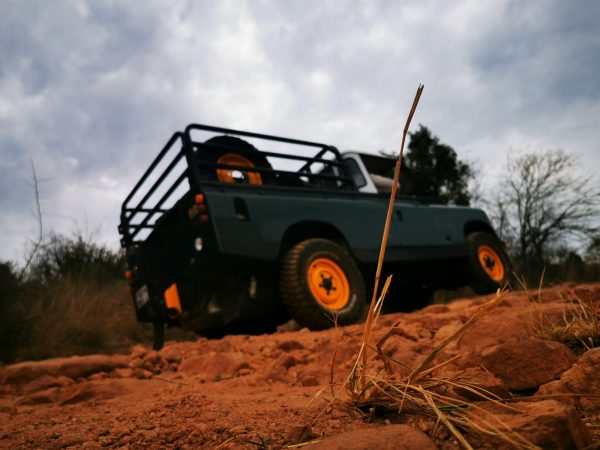 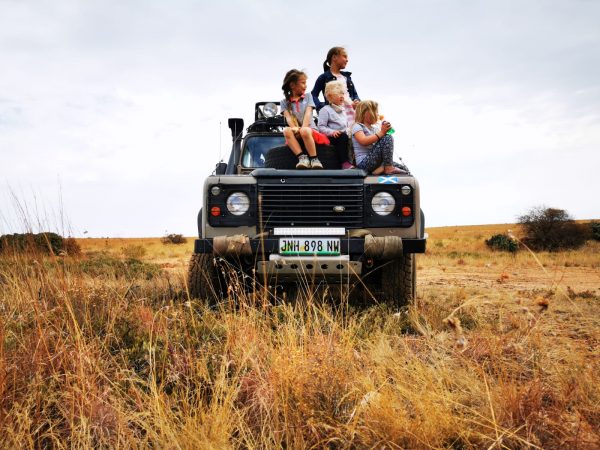 We left the campsite after breakfast to yet another natural phenomenon. After about an hour’s drive through private farms – we had permission – we arrived at a water crossing. No problem for the Landies! We soon arrived at our destination – a natural bridge crossing the Vaal River. Yes, the official Vaal! The Vaal River has its origin just 2km upstream from the natural bridge – what a spectacular site! Trent had his fly-fishing rod and wet a line – no luck, unfortunately (like the flamingos!) We spent some time at the natural bridge before hiking back to our vehicles. It was hot and the cool water in the dam closeby was inviting. Trent, Istene and Minette went for a swim, and Ayla joined in. Sydney and Stanley took off their hiking boots and put their tired feet in the cool water. Time for chillaxing . . .

We left after cooling down. Standley’s Landy needed hydraulic fluid for the steering. When we reached the tar road, Stanley and Sydney turned towards Ermelo and the rest of the convoy followed André back to Chrissiesmeer. We arrived just before lunchtime at John Jack and the Billiard Room. We were joined by Stanley and Sydney soon after; the Landy’s hydraulic reservoir filled. We devoured the scrumptious meat platter and André ordered extra pizza. Istene, Trent, Ayla and Minette returned to camp to start their potjie. The rest of the convoy joined André for a drive through the town to look for historic buildings. We were awed by the ancient sandstone structures scattered around town – churches with corners stones laid on 20 April 1892, the old jail built in 1880, more churches, homes, storerooms, and event John Jack and Gin House built in 1881! Wow! Chrissiesmeer is a hidden jewel!

We headed back to camp to experience yet another breathtaking sunset. Armed with our gumboots, torches, warm jackets, and cameras ready, we left camp as we had a date at 18:00 with Hester for some frog hunting – catch, identify, and release! It was getting dark, and we traversed the wetlands in our trusty Landies. Hester identified the frogs by their calls, croaking and sounds. We were slipping and sliding, diving in the mud, grass and shallow water puddles catching frogs! The crisp night air was filled with the sounds of croaking frogs and shouts of “Got one!” and “Aagh, it got away”! What a fun evening and lots of frogs caught!

Back at basecamp we enjoyed another night around the campfire until late evening. The excitement of the frog hunting and the weekends’ activities were the main topic of campfire chatter.

Monday morning arrived too soon with André’s coffee and homemade rusks. We broke camp and headed off to town for another meeting with Hester. We were excited to see the Larochelle Caves and Bushman paintings.

WOW, Chrissiesmeer has a lot to offer!! What a brilliant weekend packed with activities, sightseeing and interesting places that we visited. Thank you for all that participated in this memorable weekend!