Rust de Winter. Friday 5 April 2019, just after 9:00. The hosts of the first ever Land Rover Series Fest are applying the finishing touches. A phone rings. “Hi Dad. The heavens have opened here in Kempton Park! It’s pouring; the streets are rivers!”

We’re not scared. Land Rover Owners are tough. A little rain doesn’t scare us – it makes playing in the mud so much more fun! The Series guys are serious guys – guys with a 5pm shadow five minutes after shaving, guys having a leg of lamb for breakfast and the rest of the lamb for lunch. A little rain doesn’r scare them...

The LandyFest hosts have been at Rust de Winter from the Wednesday getting things ready. “It’s a great venure,” says André Verster, one of the hosts, under some of the massive decades-old Swart Apiesdoringbome. This is bushveld.
By Thursday evening everyting is ready. André, his co-host Rocco le Roux are sitting around a massive camp fire – bush TV, as they call it. The hear the call of a jackal far away.

Suddenly there is movement around the entrance to the camp site. The lights of a Defender come into view. It’s André Mouton from main event sponsor Leimers Land Rover.

The guys are excited to see a beautiful Forward Control on the trailer behind the Defender. The Forward Control was known as the Land Rover 101FC and developed for the British army.
André’s proud and joy is a Series 2A 109. She is called Landy Jane, but typically woman she won’t be ready on time – something about an oil leak that still needs to be fixed at a workshop somewhere in Strijdom Park. Sean couldn’t fit the gearbox in time. What a pity – a huge disappointment.

She’s about to miss her first LandyFest.

As the rising sun starts heating up the Friday morning, the terrain starts changing. The men and women taking part in the challenge start arriving in their Series vehicles. It is a hive of activity as they set up camp, food stalls are brought in alongside sponsors getting their displays ready, exhibitors put up their gazebos; children running around without a care in the world.
From newborns to seniors of 80+, Series 1, 2, 2A, 3 and Defenders, and last but not least – Wim Odendaal and his Overlander Forward Control with an Oz tent and camping chairs on top.

Sean Slattery and his family in their Series 3 all the way from Richards Bay arrive safely. So does Thomas Erasmus in the oldest Series at the fest, a 1954 Series 1.

Richard Huchzermeyer in his beautiful 1963 Series 2A 88 arrives as well.

A quick count reveals no less than 40 Series Landies – and lots of spectators in Defenders, Discoverys and even some Range Rovers. Even the ambulance is a Defender.

Oh, well, some other vehicles as well, yes. “It’s a Land Rover thing – you won’t understand.”
The arena is bursting from its seams with all the exhibitors and sponsors, including main sponsor Leimers with their Forward Control and three other Landies; Fakawi with three vehicles – a 110 Hard-top with a canvas canopy older than 12 years, a 130 boasting a brand new Fakawi canopy and a 110 single-cab with a Fakawi High Capacity frame that can hold 300 kg. The Landy Net with two beautiful Series Landies, REM Landy with two Series Landies as well, Frontrunner with their fully-equipped 130, Opposite Lock, Spanjaard, Superwinch, LROC, Dinokeng Nature Conservation and many others, all promising a great LandyFest.

The sun breaks through the cloud on Saturday morning, announching what later become a beautiful, hot day. Members of the Land Rover Owners Club of SA (LROC) help controlling competitors on the challenging 4x4 route and other activities for the morning.

All competing Series Landies park in a convoy. With entries and documentation completed, vehicles numbered and drivers and navigators each receiving a Rust de Winter LandyFest Leimers 2019 T-shirt and a Spanjaard “goody-bag” filled to the brim with Spanjaard lubrication products and other goodies, every competing vehicle receives a unique metal LR Classic badge – a one-off token that will have a very special meaning in the years to come. 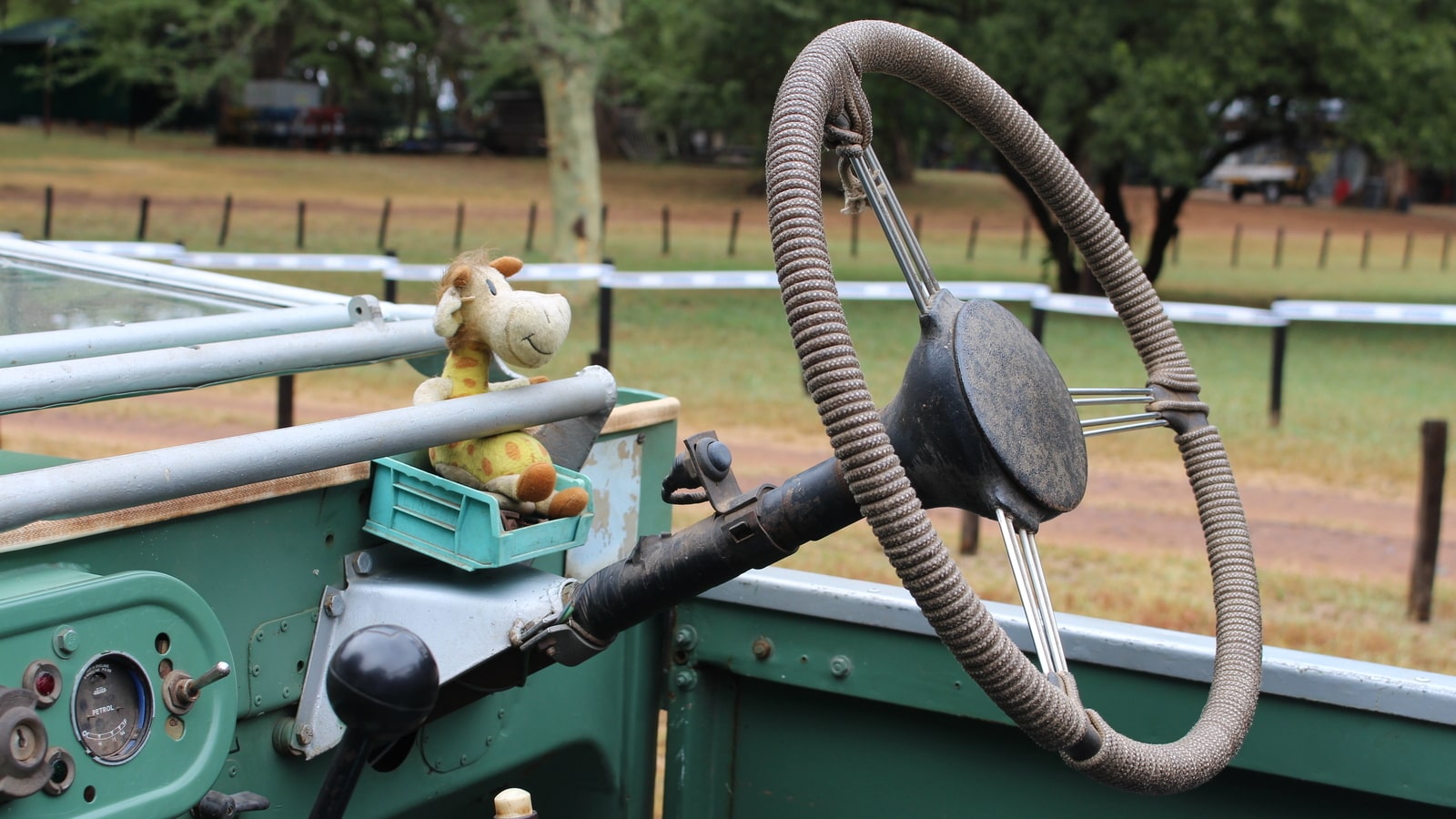 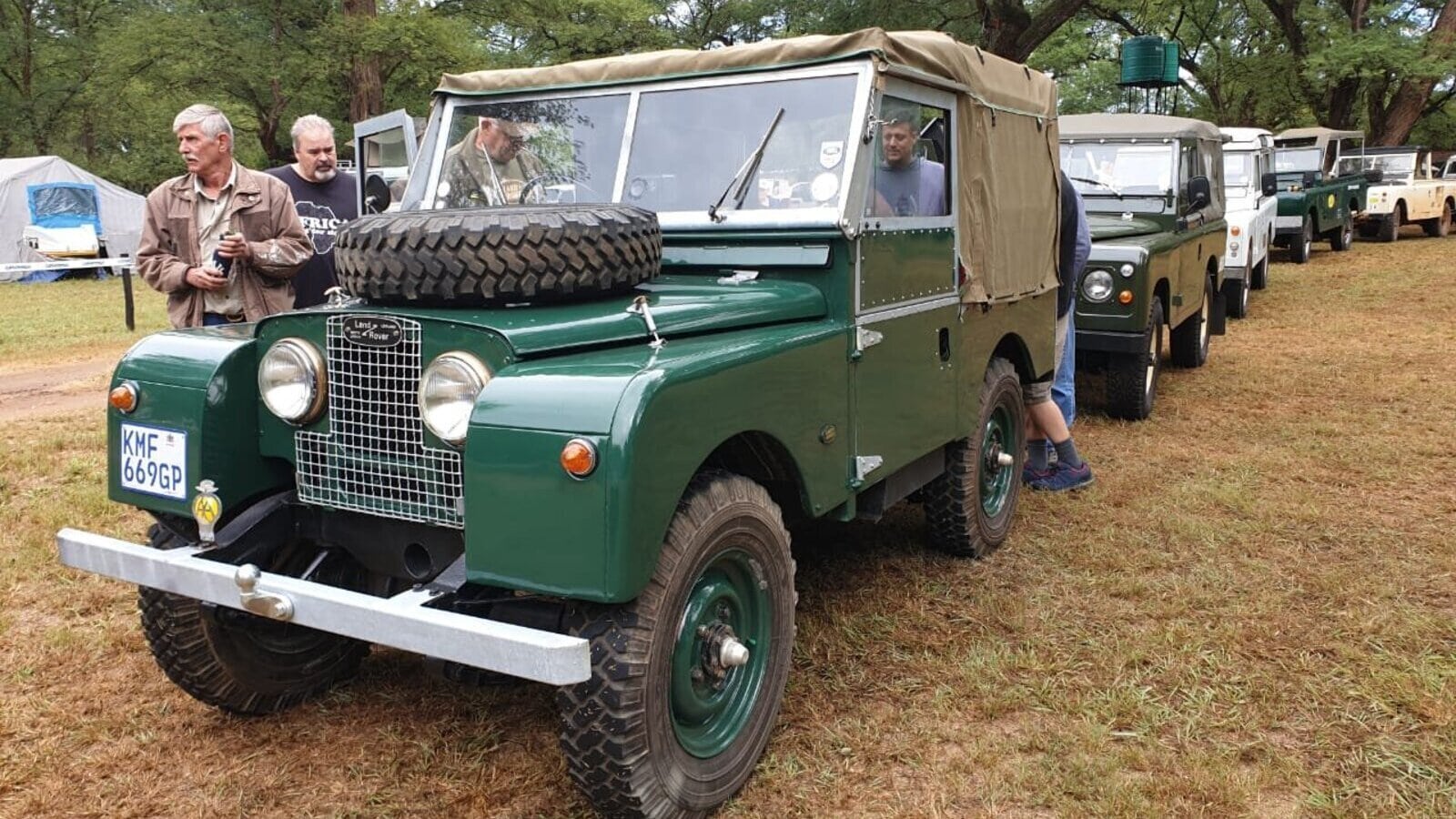 The convoy departs in high anticipation of the challenges lying ahead, not sure exactly what to expect. Every vehicle has a score card for the games the occupants have to take part in along the route. Driving expertise was not taken into account as the route was laid out in such a way that the elderly vehicles (and their owners) would be able to complete the route without endangering the classic vehicles or their occupants.

A beautiful route was laid out along the many tracks in the bush, including a river bed loaded withg some challenges and obstacles. It’s Land Rover country – up and down the river banks, sharp turns in the bush (the old ladies take their time), across washouts and dongas and up and down steep inclines. Every now and then a LROC marshal jumps out to stop the vehicle and challenge the occupants to a game – sometimes the driver and sometimes the navigator, or both.

These include shooting at animal targets using catapults; navigators sucking and holding ping-pong balls to the end of a pipe and transferring it to the driver; using a stick to pick up wheelnuts and stacking them; playing “giffie”; throwing motorcycle tyres over steel pins, picking up cans and moving them around using a piece of spaghetti...

At the last obstacle the Landies have to exit the riverbed. It’s slippery and the guys from SuperWinch are eagerly standing by to help if necessary. The onlookers encourage the participants and one by one the old Landies manage to exit – without any help from SuperWinch.

Then the unthinkable happens! LROC chairman Jakob Jordaan followed the convoy in his Discovery to act as sweep, leanding a helping hand to anyoine that gets stuck. Where the old ladies managed in style, the Disco lost a drive shaft, but no problem – with more than enough “bush mechanics” on hand the broken part is quickly disconnected, downgrading the the Discovery to a two-wheel drive with a red-faced Jakob completing the route. However, getting out of the river bed with only two wheels doing the work, became an impossible feat and the Disco ended up as the only vehicle that had to be recovered by the Superwinch team...

Well done to each of the Series Land Rovers! It was great fun!

The hot sun burnt off every bit of cloud and the guys worked up a thirst – time to head back to camp for lunch.

The food stalls served up jafflels, pannekoek, tjips, drinks and a variety of meals and drinks. The morning activities took its toll on man, but not machine.

Soon after the lunch break the next activities were announced – the LandyFest Radio Control challenge. As they say – boys never grow up; their toys get more expensive, and in the evcent of the radio-controlled miniature Land Rovers this was definitely the case. Some of the ladies also took the controls, although for some of the competitors it was not as easy – RC cars are notoriously difficult to manouvre.
Rocco took to the PA system – time for the last activity of the day. Everyone was called to the arena for the “Crank a Landy and tyre change” challenge. Rocco shows his mettle turning the crank lever – that is the lever pushed into the engine form the front bumper to turn the crank, hence the saying “turning the crank” to start the engine. After the 1920s this was unique to the Series series – to crank the engine to start her up. The challenge included the spare to be removed from the bonnet, the engine to be cranked, the spare replaced with the engine idling, and then then engine swithed off using the kley – all with the stopwatch running. Some of the younger guys had the advantage of upper body strength and some even broke a lever or two, but no problem – we brought 10!

As the sun sets, André serves up “pap en sous” for everyone at a bring and braai at the centre camp fire and no less than five braais. The day’s activities were discussed long into the night, and as the last pieces of wood started burning high, Johan called out the winners of a host of sponsored prizes and a lucky draw for a Superwinch. The winner was a woman all the way from the Far East.

Leimers also offered discount vouchers to some special winners:
* Wim Odendaal – the one and only Forward Control at the event
* Sean Slattery – all the way from Richards Bay in his Series 3 to collect his badge
* Thomas Erasmus – the oldest Landy, a 1954 Series 1
* Richard Huchzermeyer – a beautiful 1963 Series 2A 88
* Darin Boyce – arriving with a spluttering Series 3 and receiving the Spirit award

Thank you everyone for making the 2019 LandyFest a major success. See you next year.